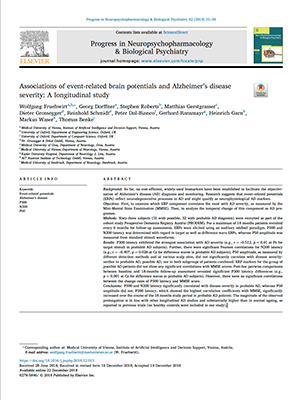 BACKGROUND:
So far, no cost-efficient, widely-used biomarkers have been established to facilitate the objectivization of Alzheimer’s disease (AD) diagnosis and monitoring. Research suggests that event-related potentials (ERPs) reflect neurodegenerative processes in AD and might qualify as neurophysiological AD markers.

OBJECTIVES:
First, to examine which ERP component correlates the most with AD severity, as measured by the Mini-Mental State Examination (MMSE). Then, to analyze the temporal change of this component as AD progresses.

METHODS:
Sixty-three subjects (31 with possible, 32 with probable AD diagnosis) were recruited as part of the cohort study Prospective Dementia Registry Austria (PRODEM). For a maximum of 18 months patients revisited every 6 months for follow-up assessments. ERPs were elicited using an auditory oddball paradigm. P300 and N200 latency was determined with regard to target as well as difference wave ERPs, whereas P50 amplitude was measured from standard stimuli waveforms.

CONCLUSIONS:
P300 and N200 latency significantly correlated with disease severity in probable AD, whereas P50 amplitude did not. P300 latency, which showed the highest correlation coefficients with MMSE, significantly increased over the course of the 18 months study period in probable AD patients. The magnitude of the observed prolongation is in line with other longitudinal AD studies and substantially higher than in normal ageing, as reported in previous trials (no healthy controls were included in our study). 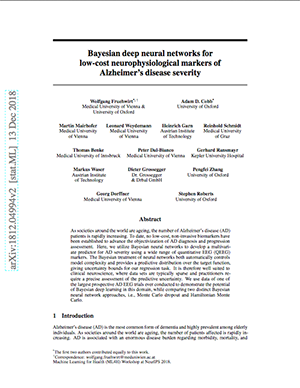 ABSTRACT
As societies around the world are ageing, the number of Alzheimer’s disease (AD) patients is rapidly increasing. To date, no low-cost, non-invasive biomarkers have been established to advance the objectivization of AD diagnosis and progression assessment. Here, we utilize Bayesian neural networks to develop a multivariate predictor for AD severity using a wide range of quantitative EEG (QEEG) markers. The Bayesian treatment of neural networks both automatically controls model complexity and provides a predictive distribution over the target function, giving uncertainty bounds for our regression task. It is therefore well suited to clinical neuroscience, where data sets are typically sparse and practitioners require a precise assessment of the predictive uncertainty. We use data of one of the largest prospective AD EEG trials ever conducted to demonstrate the potential of Bayesian deep learning in this domain, while comparing two distinct Bayesian neural network approaches, i.e., Monte Carlo dropout and Hamiltonian Monte Carlo.

ABSTRACT
Event-related potentials (ERPs) have been shown to reflect neurodegenerative processes in Alzheimer’s disease (AD) and might qualify as non-invasive and cost-effective markers to facilitate the objectivization of AD assessment in daily clinical practice. Lately, the combination of multivariate pattern analysis (MVPA) and Gaussian process classification (GPC) has gained interest in the neuroscientific community. Here, we demonstrate how a MVPA-GPC approach can be applied to electrophysiological data. Furthermore, in order to account for the temporal information of ERPs, we develop a novel method that integrates interregional synchrony of ERP time signatures. By using real-life ERP recordings of a prospective AD cohort study, we empirically investigate the usefulness of the proposed framework to build neurophysiological markers for single subject classification tasks. 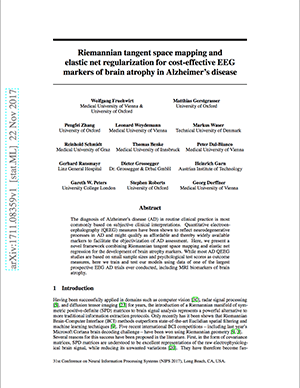 ABSTRACT
The diagnosis of Alzheimer’s disease (AD) in routine clinical practice is most commonly based on subjective clinical interpretations. Quantitative electroencephalography (QEEG) measures have been shown to reflect neurodegenerative processes in AD and might qualify as affordable and thereby widely available markers to facilitate the objectivization of AD assessment. Here, we present a novel framework combining Riemannian tangent space mapping and elastic net regression for the development of brain atrophy markers. While most AD QEEG studies are based on small sample sizes and psychological test scores as outcome measures, here we train and test our models using data of one of the largest prospective EEG AD trials ever conducted, including MRI biomarkers of brain atrophy. 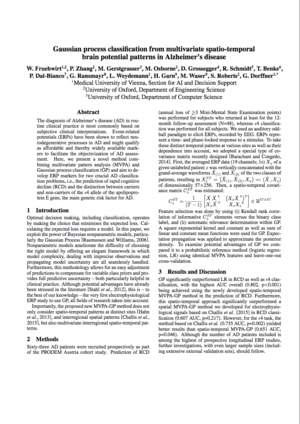 ABSTRACT
The diagnosis of Alzheimer’s disease (AD) in routine clinical practice is most commonly based on subjective clinical interpretations. Event-related potentials (ERPs) have been shown to reflect neurodegenerative processes in AD and might qualify as affordable and thereby widely available markers to facilitate the objectivization of AD assessment. Here, we present a novel method com- bining multivariate pattern analysis (MVPA) and Gaussian process classification (GP) and aim to develop ERP markers for two crucial AD classifica- tion problems, i.e., the prediction of rapid cognitive decline (RCD) and the distinction between carriers and non-carriers of the ε4 allele of the apolipopro- tein E gene, the main genetic risk factor for AD. 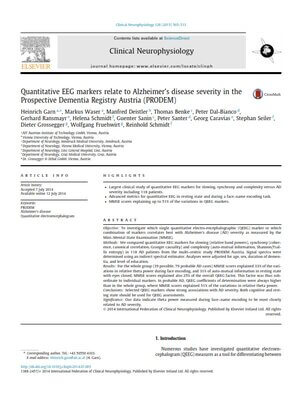 ABSTRACT
We analyzed the relation of several synchrony markers in the electroencephalogram (EEG) and Alzheimer’s disease (AD) severity as measured by Mini-Mental State Examination (MMSE) scores. The study sample consisted of 79 subjects diagnosed with probable AD. All subjects were participants in the PRODEM-Austria study. Following a homogeneous protocol, the EEG was recorded both in resting state and during a cognitive task. We employed quadratic least squares regression to describe the relation between MMSE and the EEG markers. Factor analysis was used for estimating a potentially lower number of unobserved synchrony factors. These common factors were then related to MMSE scores as well. Most markers displayed an initial increase of EEG synchrony with MMSE scores from 26 to 21 or 20, and a decrease below. This effect was most prominent during the cognitive task and may be owed to cerebral compensatory mechanisms. Factor analysis provided interesting insights in the synchrony structures and the first common factors were related to MMSE scores with coefficients of determination up to 0.433. We conclude that several of the proposed EEG markers are related to AD severity for the overall sample with a wide dispersion for individual subjects. Part of these fluctuations may be owed to fluctuations and day-to-day variability associated with MMSE measurements. Our study provides a systematic analysis of EEG synchrony based on a large and homogeneous sample. The results indicate that the individual markers capture different aspects of EEG synchrony and may reflect cerebral compensatory mechanisms in the early stages of AD.

HIGHLIGHTS
– Largest clinical study of quantitative EEG markers for slowing, synchrony and complexity severity including 118 patients.
– Advanced metrics for quantitative EEG in resting state and during a face–name encoding
– MMSE scores explaining up to 51% of the variations in QEEG markers.

OBJECTIVE
To investigate which single quantitative electro-encephalographic (QEEG) marker or which combination of markers correlates best with Alzheimer’s disease (AD) severity as measured by the Mini-Mental State Examination (MMSE).

SIGNIFICANCE
Our data indicate theta power measured during face-name encoding to be most closely related to AD severity.

BACKGROUND
Quantitative electroencephalogram (qEEG) recorded during cognitive tasks has been shown to differentiate between patients with Alzheimer’s disease (AD) and healthy individuals. However, the association between various qEEG markers recorded during mnestic paradigms and clinical measures of AD has not been studied in detail.

OBJECTIVE
To evaluate if ‘cognitive’ qEEG is a useful diagnostic option, particularly if memory paradigms are used as cognitive stimulators.

METHODS
This study is part of the Prospective Registry on Dementia in Austria (PRODEM), a multicenter dementia research project. A cohort of 79 probable AD patients was included in a cross-sectional analysis. qEEG recordings performed in resting states were compared with recordings during cognitively active states. Cognition was evoked with a face–name paradigm and a paired-associate word list task, respectively. Relative band powers, coherence and auto-mutual information were computed as functions of MMSE scores for the memory paradigms and during rest. Analyses were adjusted for the co-variables age, sex, duration of dementia and educational level.

CONCLUSION
qEEG alterations recorded during mnestic activity, particularly face–name encoding showed the highest association with the MMSE and may serve as a clinically valuable marker for disease severity. 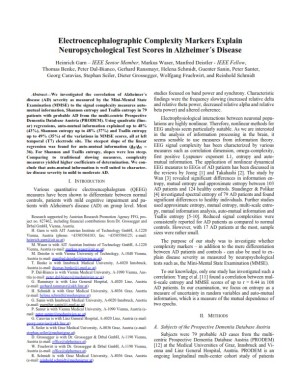 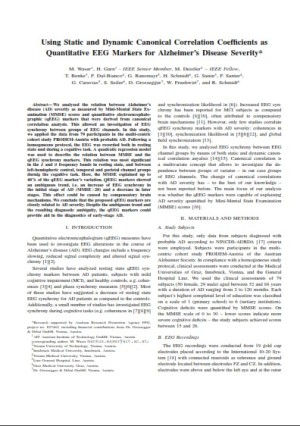 ABSTRACT
We analyzed the relation between Alzheimer’s disease (AD) severity as measured by Mini-Mental State Examination (MMSE) scores and quantitative electroencephalographic (qEEG) markers that were derived from canonical correlation analysis. This allowed an investigation of EEG synchrony between groups of EEG channels. In this study, we applied the data from 79 participants in the multi-centric cohort study PRODEM-Austria with probable AD. Following a homogeneous protocol, the EEG was recorded both in resting state and during a cognitive task. A quadratic regression model was used to describe the relation between MMSE and the qEEG synchrony markers. This relation was most significant in the δ and θ frequency bands in resting state, and between left-hemispheric central, temporal and parietal channel groups during the cognitive task. Here, the MMSE explained up to 40% of the qEEG marker’s variation. QEEG markers showed an ambiguous trend, i.e. an increase of EEG synchrony in the initial stage of AD (MMSE>20) and a decrease in later stages. This effect could be caused by compensatory brain mechanisms. We conclude that the proposed qEEG markers are closely related to AD severity. Despite the ambiguous trend and the resulting diagnostic ambiguity, the qEEG markers could provide aid in the diagnostics of early-stage AD. 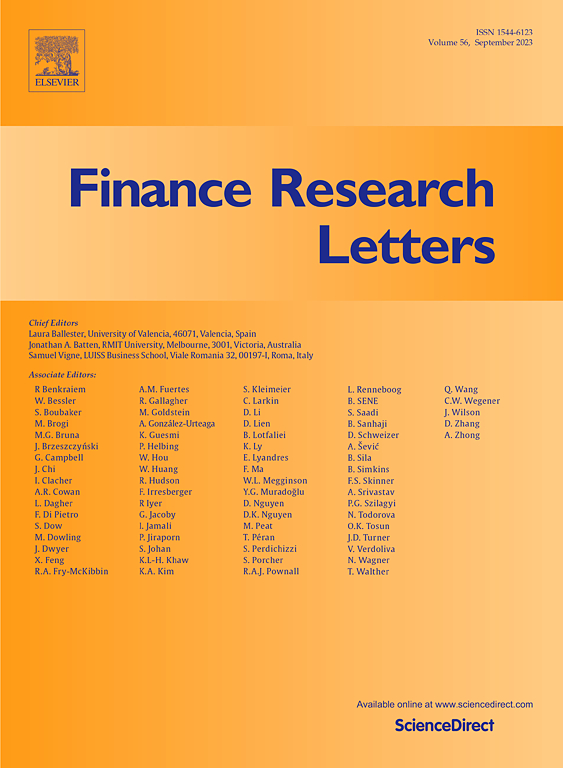 HIGHLIGHTS
– First study of its kind to use intraday data (5-min resolution).
– Highly significant (p < 2.2e−16) structural change in the relationships between cryptocurrencies towards instability, as indicated by increased wavelet coherence after the Bitcoin peak.
– Robustness of findings demonstrated by extensive sensitivity analysis.
– Visualizations with high time-frequency resolution vividly depicting bubble dynamics.
– A large variety of well-known and lesser-known cryptocurrencies is considered.

ABSTRACT:
After its price peaked in 2017, Bitcoin lost almost half of its value in US Dollars within one month, which in turn is likely to have influenced the behavior of market participants many of who were lay investors. We hypothesize that after the peak, there was a structural change in the relationships between cryptocurrencies towards instability, as indicated by increased interdependence. We utilize wavelet coherence analysis of intraday data (5-minute resolution) to investigate the dynamics between a variety of cryptocurrencies in time-frequency space. Accompanied by visualizations depicting bubble dynamics, our robust and highly-significant quantitative results confirm our hypothesis. 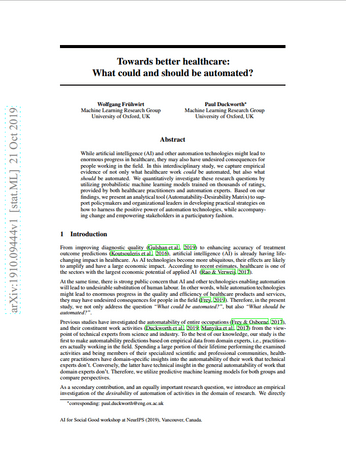 ABSTRACT:
While artificial intelligence (AI) and other automation technologies might lead to enormous progress in healthcare, they may also have undesired consequences for people working in the field. In this interdisciplinary study, we capture empirical evidence of not only what healthcare work could be automated, but also what should be automated. We quantitatively investigate these research questions by utilizing probabilistic machine learning models trained on thousands of ratings, provided by both healthcare practitioners and automation experts. Based on our findings, we present an analytical tool (Automatability-Desirability Matrix) to support policymakers and organizational leaders in developing practical strategies on how to harness the positive power of automation technologies, while accompanying change and empowering stakeholders in a participatory fashion.